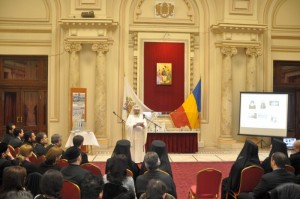 The fulfillment of seven years since the establishment of newspaper Light, newspaper of the Romanian Patriarchate, was marked today in the room ŌĆ×Europe ChristianaŌĆØ of the Patriarchal Palace in the presence of His Beatitude Daniel, Patriarch of the Romanian Orthodox Church. The event was attended by His Eminence Timotei, Romanian Orthodox Episcopate of Spain and Portugal, His Eminence Ciprian C├ómpineanul, Patriarchal Vicar Bishop, His Eminence Varlaam Ploiesteanul, Patriarchal Vicar Bishop, His Eminence Varsanufie Prahoveanul, Assistant Bishop of the Archdiocese of Bucharest, members of the Standing National Church Council and of the diocesan Council of the Archdiocese of Bucharest, the newspaper Light and their colleagues from other parts of the Basilica Press Centre. 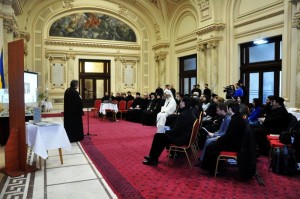 ┬Ā┬Ā┬Ā┬Ā┬Ā┬Ā┬Ā┬Ā┬Ā┬Ā┬Ā Also, today was launched the book ŌĆ×People and places in the history of Church from OlteniaŌĆØ, deacon father Apostolache Ionita, and published by Metropolitan of Oltenia Publishing. The volume is a collection of journalistic texts (articles, interviews, reports) published over time in the newspaper Light, Edition of Oltenia. In the 200 pages, readers have the opportunity to discover a true lesson of living and of history, offered from the behalf of the characters interviewed, of the described places or of the subjects treated. Thus, in the interviews section, you can find names of Oltenia church life, such as His Eminence Irineu, Archibishop of Craiova and Metropolitan of Oltenia, Father PhD Alexie Buzera, Father PhD Picu Ocoleanu, Father PhD Constantin P─ātuleanu, Prof. Toma R─ādulescu, Deacon Prof. Alexandru Racu, Father Ioan Ioanicescu, Prof. PhD Tudor Nedelcea, Prof. PhD Ion Buzera, Father PhD Alexandru Isvoranu etc.

┬Ā┬Ā┬Ā┬Ā┬Ā┬Ā┬Ā┬Ā┬Ā┬Ā┬Ā On the occasion of this festivity was also launched the website of the Romanian Orthodox Photo Library containing photo collections 2012 photos currently, (the photo materials from the Central Historical National Archives (ANIC), especially from the background photo library, but also from the archives of the National Council for the Study of the Archives of the Security (ACNSAS), private collections and various works of history) most of them from the first half of the twentieth century, which present ministers, teachers, monks, places of worship and monasteries, some lost or renovated, several times/ events Romanian from the church life in the country and abroad etc.

┬Ā┬Ā┬Ā┬Ā┬Ā┬Ā┬Ā┬Ā┬Ā┬Ā┬Ā In the end of the event, His Beatitude Patriarch Daniel addressed the audience highlighting a word that ŌĆ×Light newspaper fulfills, with means specific to the press, but also through the online edition, its chronic vocation of living Romanian Orthodox spirituality in the context of cultural and socio-economic from the beginning of this millennium. Today I got the ŌĆ×seven light stepsŌĆØ that gathered events and spiritual advice reports, interviews, memorials in Church history and more news about happiness and suffering, about the achievements and failures, on the facts of light, but also about the challenges and temptations of nowadays in the printed pages of the dailyŌĆØ, as testified to His Beatitude.
(Source: Basilica)