The life and the akathist of the St. Great Martyr Pantelimon 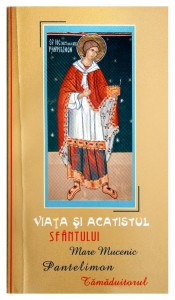 Saint Great Martyr Pantelimon lived in the reign of Maximian Galerius, originating from the city of Nicomedia. At birth, was named Pandoleon, which means ‚Äústrong at all as a lion.” He could not receive too much Christian education from his mother because she moved soon into eternity. Under the guidance of his father, the child forgot the Christian teaching of his mother and became as his father, an idolater. Pandoleon was sent to schools where he learned more philosophy. After it, he becomes an apprentice to a doctor named Eufrosin from which he learned the art of diseases. Meanwhile, Pandoleon met the old priest Ermolaos, who taught him faith in Christ and the spiritual art of healing souls and bodies. He was baptized by the priest Ermolaos and received the name of Pantelimon, meaning “the all merciful”. His wonderful deeds and faith in Christ made ‚Äč‚Äčhim widely known, for which he was tried and was martyred. Every year he is celebrated on July 27.